June 6, 1995
Pete Castle ArchivesComments Off on POP WITH POP 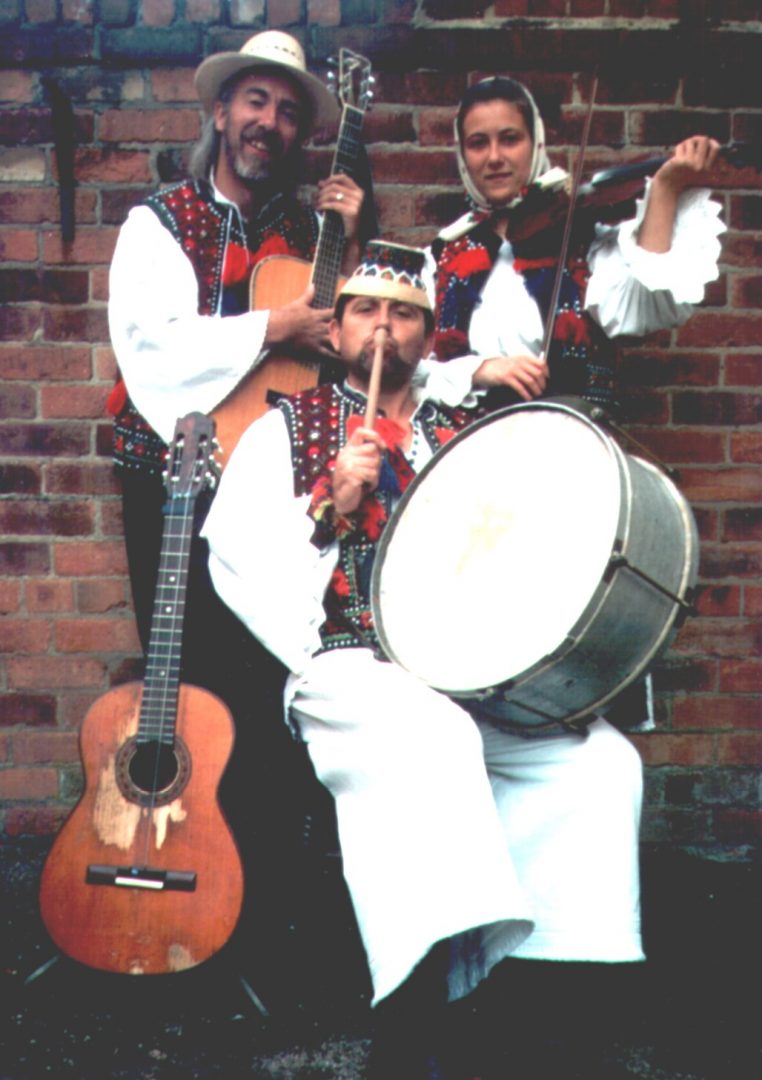 Think about Eliza Carthy, Nancy Kerr, Simeon Jones… these (and more) were born into it. Folk music was going on all round them. If they had a childhood like that of my daughters Jane and Susan, they were carted around clubs and festivals from the age of six months (when children are at their most portable).
Lucy Castle, now 25, comes from this honourable background. Daughter of Pete and Sue Castle, who’ve been folkin’ around for years, Lucy took up the violin (so-called when you play classical music) at eight, and picked out the tunes she’d heard around the scene on the same fiddle (so-called when you play folk stuff). She began to accompany her dad and to do the odd floor spot’ and then gigs in her own right. Through the Bedfordshire Youth Orchestra, she progressed to Chetham’s School of Music, Manchester, and London’s City University. That’s where she got hooked on east European fiddle music.
Lucy made three short trips through Hungary Into Romania in 1992-93. In summer 1993, she heard that Iza, a Romanian-based band led by loan Pop, was playing in Nottingham. She played, by invitation, in their final set and she and Pop agreed to meet up in Romania in October of that year.
On that field trip (it lasted ten months), Popica (or Pop) acted as guru. Lucy played with loan and with Iza, went to village weddings and parties. Her birthday party yielded so many musicians that the affair became a jam session (I’ve got a video tape to prove it). Lucy learned to play Transylvanian music outwards from the inside – especially that of Popica’s region, Maramures. She and loan did well as a duo and thought they would give it a whirl in England. Would Pete like to join them to form a trio? Try and stop him.
No; they didn’t. But getting a work permit for loan nearly did stop them. Four days to go, and then, perhaps a little under-rehearsed, Popeluc made its debut at Broadstairs Festival 1994. Pete had worked out chords for a couple of songs from a tape Lucy had sent to him. He quickly picked up the three basic Maramures rhythms. Pop learned chord sequences for a few English numbers. The trio integrated their performances as they went along with fingers crossed.
Things have progressed. The Maramures music is now played to its traditional line-up: fiddle zongora (a type of guitar), and doba (tabor) Ropica also plays braci (a member of the viola family) and cetera (fiddle).
That first tour took in local and national radio and eighteen gigs – Pete is an indefatigable publicist -that included clubs, festivals, a couple of arts centres, and Chetham’s school (Lucy, of course, has connections). The group laid down a tape and Pete told me he was glad that their Folk On 2 session, recorded very late in the tour showed a better standard of performance.
No wonder. Pete now 48, turned professional close on twenty years ago as singer, instrumentalist, story teller and song writer. He’s worked in the community and with children, as well as doing the clubs/festivals circuit. And he’s no stranger to out-of-the-way combinations: he made, a modestly under-publicised cassette with Bengali singer and musician Aroti Biswas for his own Steel Carpet label.
loan Pop, still under 40, served his time (ten years) with the folk ensemble Maramuresul, regionally based but nationally known. As a child, his idea of playing grown-ups was to run mock wedding ceremonies and to provide the music. Later he was one half of two duos that (separately) carried off first fiddling prize at the national festival, Cintarea Romaniei. He formed the group Iza, which has toured Austria, Hungary, France, Britain, and Switzerland…
The trio’s name Popeluc is invented—POpica, PEte, LUCy but the word has the ring of a genuine Romanian word. The group’s cassette is also smartly named, Maramures Et Cetera – the cetera is, of course, the Romanian fiddle.
In my time, I’ve heard quite a lot of Romanian folk music, there and here, and Popeluc has the authentic ring about it. The way Lucy (offstage she’s rather quiet and dignified) has absorbed the boisterousness and style of the Transylvanian music idiom is unbelievable.
Popeluc will be back in Britain in October/November. I guess loan Pop may have to fly home. After last year’s inaugural tour, he planned to drive back to Romania with Lucy, bound there for extra research into the music. France, Belgium, Holland and Germany were among the nations that welcomed the fall of communism. But none of these bastions of Western democracy would give Popica a transit visa. Lucy motored with the gear; Ioan flew home. What a waste of time and money!