June 6, 2018
Pete Castle ArchivesComments Off on THE SMITHSONIAN FOLKLIFE FESTIVAL in WASHINGTON DC

There are times when I can’t believe how lucky I am to do what I do for a living. This was one of them. For a week at the end of June/beginning of July I found myself working alongside some of the finest artists and craftsmen from Kent, Virginia and Senegal on the spectacular Mall between the Capitol and the Washington Monument in the middle of Washington DC USA. It was the annual Smithsonian Folklife Festival which has been described thus:

“The Smithsonian Folklife Festival is an international exposition of living cultural heritage annually produced outdoors on the National Mall of the United States in Washington, D.C., by the Smithsonian Center for Folklife and Cultural Heritage. The Festival takes place for two weeks every summer, overlapping with the Fourth of July. It is an educational presentation that features community-based cultural exemplars. The Festival, like the Smithsonian museums, is free and open to the public; it typically draws more than one million visitors each year.” [Smithsonian press release]
or more poetically:
“Seven city blocks; 10 days of arts, crafts, music, sports and games; 32 languages; 90-degree temperatures; 103 tents; 415 volunteers and 707 guest participants: Yes, the 41st annual Smithsonian Folklife Festival on the Mall promises to be a bustling, sometimes overheated, multi-tented and multicultural mini-metropolis.” [Washington Post] 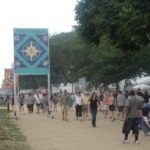 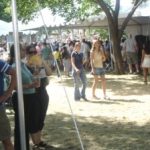 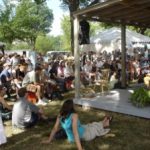 I got involved because by birth I am a Man of Kent, (although for the past 20 years I’ve been nurturing an identity as a folk singer and storyteller from Derbyshire!) Kent has links with America going back to the first settlers at Jamestown in 1607 and in recent years those links have been strengthened through official contacts at local government level. Thus it was that a delegation from ‘Kent County, England’ became the first official English participants in the 41 year history of the Smithsonian Folklife Festival and as I did a song in the opening ceremony I can claim to be the first English person to officially participate!
The Festival actually works as three festivals on adjoining sites, our section was called the ROOTS OF VIRGINIA CULTURE and further up the Mall were large contingents from the Mekong Delta of SE Asia and from Northern Ireland. During the day we worked independently but, out of hours, we all mixed and socialised.
We musicians/storytellers did several sets each day on one or other of the various stages and joined random selections of other artists to discuss a variety of topics on the discussion stage. (On one of these I, a 30 year vegetarian, found myself in a conversation about food with a couple of Blue Ridge Mountain cooks who kill and eat anything that moves! They took me aside afterwards to check that I was really well, could I survive without meat, was my blood OK and did I have enough energy?)

It was a bit unreal to find yourself sharing a stage with a great blues singer like John Cephus or some of the Appalachian banjo pickers who looked as though they’d walked straight out of Deliverance! and preachers lining out Southern Baptist hymns. But they were all great people who respected my material and shared much the same ideas about how the tradition is used and abused; how it might or should develop. “That crap coming out of Nashville” said one, “That’s turning the young folk towards real music.”) 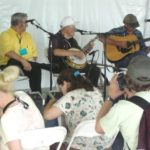 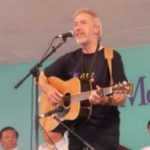 I’d been asked to perform at the opening ceremony. By the time I was on stage the audience had been listening to strange music and long speeches for nearly 2 hours so it wasn’t the time for a serious ballad or long story! ‘Hopping Down in Kent’ proved to be the right choice and I’m told that the Governor of Virginia, the Ambassador for China, Martin McGuinness et al were joining in and swaying along behind me!
For all the participants, I’d guess, it was a once in a lifetime opportunity. You don’t often get the chance to be heard by over 160,000 people in one day! (They reckon on 1 million people during the course of the festival. It’s all free—a ‘museum without walls’.) I’m not sure who said the quote at the top but it summed it all up. To eat breakfast with American Indians; to hear Chinese, American, and Vietnamese musicians jamming together; to engage in good natured banter about politics with a Rev. from Northern Ireland; to share a lift with exotically clad dancers from Cambodia… you think you’re in a dream.
Because we had a busy performance schedule I didn’t have much time to see other artists perform except those with whom I was sharing stages. I was particularly struck by Brien Fain and Jim Marshall and saw a bit from a young bluegrass band—No Speed Limit but their name seemed to sum them up. On a couple of occasions I managed to get a brief glimpse of Jack Lynch working with that fine singer Len Graham in the N.Ireland tent but I didn’t venture into the Mekong Delta area because there wasn’t time to make it worthwhile.
Sadly, apart from a walk across the Potomac into Georgetown on the last morning before flying home, neither did I see anything of Washington except the couple of miles between the hotel and the Mall! The Mall is surrounded by some of the finest museums in the world and they’re all free but apart from a quick look round the art gallery when I went in to use their ‘bathroom’ I didn’t see them either.
Excitingly the hotel was on Route 66 so I can now claim to have travelled at least 200 yards of that famous highway! Another trip is called for!

The car bomb incidents at Glasgow airport and in London happened while we were in USA so we were faced with increased security on the way home. This was more than made up for though, by the fact that the two of us who flew home after the first week were bumped off our Virgin flight onto an earlier United one and upgraded to Business Class! Now that is the way to travel!
(I was there for the first week along with Tim Laycock and Sonia Ritter doing a play set in Kent and Lucky Moyo from Music for Change. For the second week I was replaced by the Millen Family and Dave Arthur. Why it was decided that way I don’t know…) 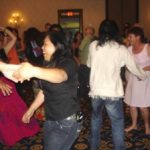 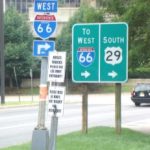 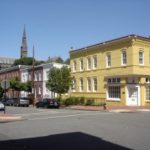 It was a huge investment in time and resources by the regions involved—N.Ireland in particular poured money into it and KCC must have spent a lot. In return they should all get a higher profile, recognition, a place on the world stage. The same should apply to the individuals. We’ve all returned with contacts and friendships and I, for one, am going to get as much return as I can from the experience.