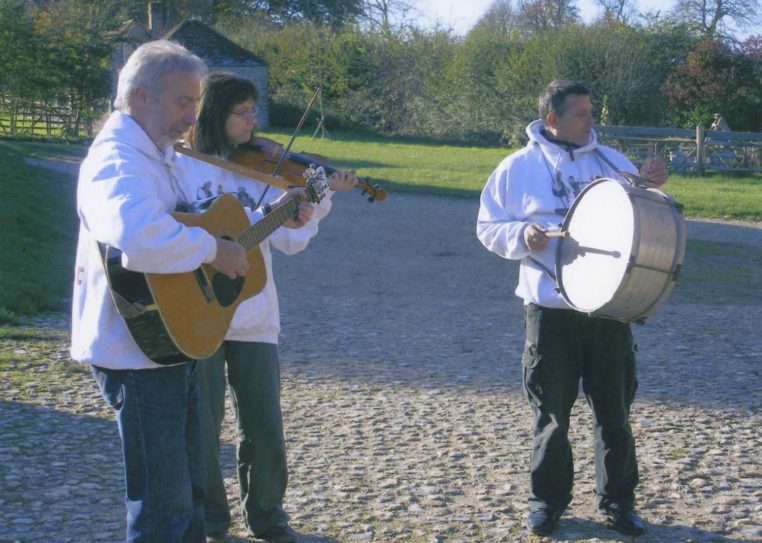 A REPORT
Popeluc formed a large part of our lives—musically and in other ways—from 1995-1997. The trio had originally been seen as a one-off, very short term, project but it gelled so well that we came to see it as permanent (or as permanent as ‘groups’ ever are!)
By the third tour in 1997 we were getting quite a high profile and there was an ongoing demand to book us, but somehow the next tour never happened. As time went by and things changed it looked as though the idea had passed its sell-by date and eventually I put it in the box marked ‘past experiences’. I had even started re-arranging some of the English items from the Popeluc repertoire so that I could play them solo (that’s why Jack Orion didn’t feature on that tour, I’d struggled to find a way to do it and had finally succeeded!)
Then, at very short notice and out of the blue as far as I was concerned, the idea of a short reunion tour in the UK suddenly came up. Popica had been asked to speak at the Voluntary Arts Europe Conference in Wales so he would be here. There was barely two months notice so a lot of people who would have liked to book us couldn’t because they were already booked up and publicity was in short supply because we were still confirming dates and details up to the very last minute. We missed copy dates for all the folk magazines.
BUT people went out of their way to accommodate us—The Weald & Downland Open Air Museum in W.Sussex put us on out of season; Belper Folk Club ran an extra night on a Thursday (they usually meet on Tuesdays) and so on.
The resulting tour wasn’t the most logical from the travel point of view—we had to come back to Derbyshire from Kent because I had a solo booking I couldn’t miss already arranged, and then go back down to London. Given more time we could definitely have filled a Saturday night in the south.
Musically it was as though we’d never been away. Once we started practising the break could have been 8 weeks not 8 years! Our repertoire for this tour was the highlights of previous tours plus just a few new items and everything came out feeling fresh and surprisingly tight. There were just one or two items where we struggled to remember how we had done it before—in fact I had to put on a video to see what chords I’d used for one song!
The very first gig was the WEALD Museum. It was a still, cold day and the frost didn’t shift in the shade, we were playing out of doors and there weren’t many people around but I found it surprisingly enjoyable. A good, public, rehearsal which got us really on the ball before TENTERDEN the next night. Turn-out there was disappointing. Lots of people I would have expected to be there weren’t but it went alright.
LONDON—a Romanian Restaurant near the Old Bailey was a revelation. We knew they had sold about 130 tickets in advance and when we arrived there seemed to be that number of people in but, we were told, these were all people who hadn’t booked in advance! The audience was predominantly ex-pat Romanians with a good few English people who had come to see us specifically. Popica was a bit worried that the Romanians might give us a hard time—be extra critical, but he needn’t have worried. They clapped, shouted, danced and made us very welcome. Personally it goes onto my list of Top 10 gigs of all time. An eye opening experience was that several Romanians asked about the English songs we played. Were they Irish? they wanted to know. They didn’t believe they were English because they were unaware that there was such a thing as English folk music!
At BURY ST EDMUNDS the next night there was also a Romanian contingent in the audience – there is quite a population of them in rural Suffolk apparently – they run Social Services! That gig was put on by church people who had visited Popica’s village of Hoteni and it doubled as a fund raiser for a Romanian charity. Somehow it was the most difficult gig of the lot. We didn’t play well for a variety of reasons although I don’t think the audience noticed. Popica wasn’t happy with the whole idea of playing in a church, which wouldn’t happen in Romania where the musicians stay outside. Strangely the gig had been moved at the last minute from another church which objected to the local morris side doing a spot and the raffle for the charity, so the same kind of feelings exist on both sides.
The rest of the gigs were nearer home. BELPER folk club was Popica’s favourite of the tour. Then we did an afternoon of workshops at a primary school in LEICESTER and in the evening a benefit for the Woodcraft Folk at the same venue.
Lucy’s pet project was the workshop and concert in the village hall at BURTON OVERY where she then lived. The afternoon workshop was an introduction to the music with the chance to join in and sing and play. The evening concert was a different approach to presenting our music: Lucy put together what was almost a drama narrated by her daughter Ioana and two other village children which traced ‘the Life of a Man’ and linked together many Popeluc favourites. It went very well.
We finished the tour with a ‘house concert’ in DURSLEY, Gloucestershire where we narrowly escaped the blizzard which came down the next morning by which time I was taking Popica to Luton Airport for his flight home and braving the snow on the M1 in Leicestershire on the way home. A vague sprinkling of snow in England causes chaos; half a metre in Hoteni is no problem at all!

We had intended to do another short tour but it all went awry at the planning stage although, so as not to disappoint one organiser, we did a one-off performance at the Chelsea Arts Club and Lucy and Popica did a workshop in Wales.