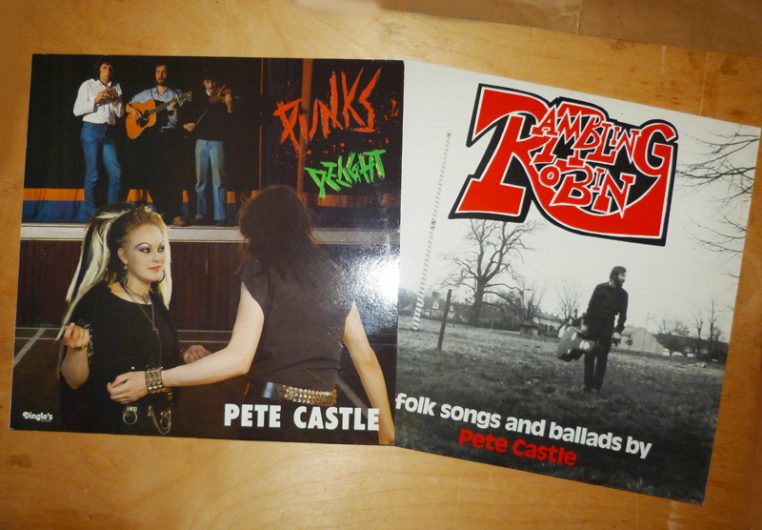 Recently someone played a track from my old LP ‘Rambling Robin’ on the radio in USA. It inspired me to dig out and play both the LPs I made back in the 1980s for the first time for many years and I was pleasantly surprised.

This was very well received at the time and sold well. It did a lot towards getting me established on the folk scene (I had gone full time about 4 years before).

My second LP came two years later, was not as well received and didn’t sell as well—but that was more down to the record company than to myself! My memory of it was that it wasn’t as good as it should have been but, when I listened the other day, I found it is! The improvement from the previous one is huge. It shows the effects of two years of solid touring.

When we moved house last year a few of each came to light so I thought I’d offer them for sale. Just for the cost of the postage. So either LP (or both!) will cost you £3 in UK (I’ll have to find out about postage costs elsewhere.) I’m not going to bother about posting them in the SHOP so if you’d like to buy just contact me and I’ll tell you how to pay—it could be Pay Pal or a cheque.

With Jez Lowe and Rob Whalley recorded by Nigel Pegrum

Canst Thou Not Weave Bonelace

The Other Side of Jordan

The Devil & the Farmer’s Wife

The Swan Swims So Bonny O

The Mare and the Foal

Roll the Cotton Down

With Rob Whalley and Trevor James recorded by Colin Whyles

When This Old Hat Was New

Ground for the Floor

The Hand Weaver & the Factory Maid 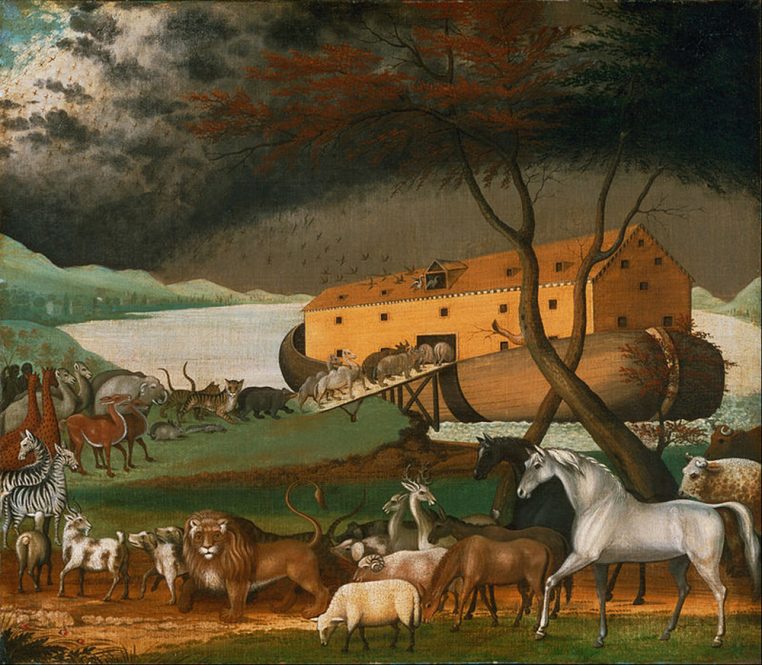 A STORY WALK AT WIRKSWORTH

AND A CONCERT AT CROMFORD

Derwent Valley Mills World Heritage Site Discovery Days run every year bringing heritage, history, arts and tourist events all down the valley from Matlock Bath to Derby plus a few side shoots to the neighbouring areas. This year’s events take place from  27th October to 4th November. There will be many of the tried and tested regular events plus some new ones, so something for everyone.

Two to bring to your notice:

A story walk for adults; on the edge of Wirksworth taking in the remains of two vital industries (lead mining and quarrying) and using them to inspire stories – not history but folk tales, although there will also be some historical fact and background.

The walk is only about 2 miles but includes some rough terrain so is not suitable for anyone with mobility problems. Starts at 11am from the car park at the National Stone Centre Porter Lane, Wirksworth DE4 4LS. It is free but numbers are limited so booking is advisable. Phone 01629-536831.

The annual concert of traditional songs and stories by Pete Castle, Keith Kendrick and Sylvia Needham. This is a well established annual event and last year someone described it as ‘a folk club that meets once a year’!

Expect songs and tales about all the usual creatures—horses, hares, herrings, the cuckoo, dogs, bears… and even the odd werewolf!

Venue is Wheatcroft’s Wharf Café by the canal at Cromford which is licensed and will be serving meals from 7pm.

Booking advisable but you could cross your fingers and turn up if you decide at the last minute 01629-536831.

See the official catalogue with all the events here: 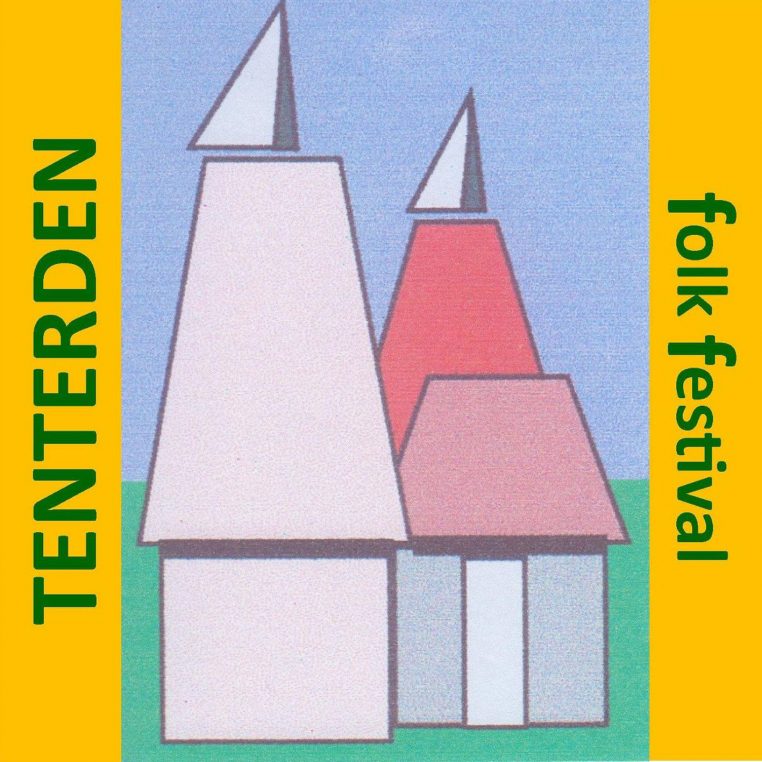 A great weekend of folk music in Kent!

This is a regular event for me. I’ve been at every one of the 26 festivals so far! (Although I only managed half of it last year! See below *.) The only problem with being a regular is trying to think of something different to do each year!

Tenterden is a small town in Kent, between Ashford, Maidstone, Tunbridge Wells and Rye. It is very rural and, a hundred years ago, was very much the centre of the hop growing industry although it’s now quite up-market and a magnet for tourists looking for the quaint and picturesque.

The festival is the kind of festival I like – mainly traditional, mostly indoor venues, quite small rooms, PA not necessary in many of them, so you really get to communicate with the audience, unlike those huge outdoor events where they are just specks in the distance! And many of them are regulars too so you get to know them.

* What happened last year? My input was cut short by an accident at home. I did a very good, enjoyable concert spot on Saturday afternoon and then got a cryptic text message saying my wife, Sue, was on her way to the hospital! ‘…but don’t do anything until you hear more!’ I did a not so good concert spot that evening by which time I’d discovered that she’d tripped over in the street and smashed her wrist (and I mean smashed!) So I had to forget Sunday and get home as quickly as I could.

One of the things I was supposed to be doing was a song workshop called ‘Stone Age Songs’ – about how old the songs we sing are. I’m pleased to say I will be doing it this year and it will be better than it would have been last year because a lot more info has come to light. My Living Tradition article (it’s on the Archive page was based on it. )

I’ll also be doing a couple of concert spots, a ‘Meet the Artist’ and interviewing Julie Felix. That should be interesting, I haven’t seen or heard her for years.

Other artists involved this year include:

There are always plenty of music sessions and singarounds and a huge shanty session. There is also a craft fair and a festival fringe on the recreation ground where rockier, electric bands play.

For info and tickets see 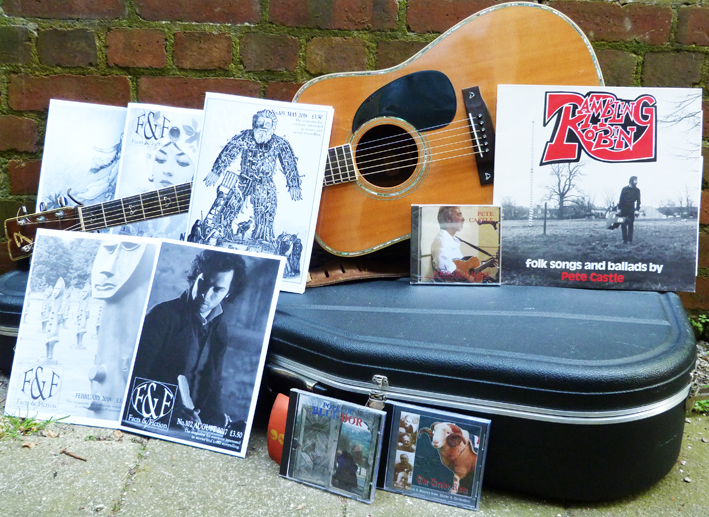 It’s a long time since I posted anything here but that doesn’t mean I haven’t been busy. For a start I’ve got a new web site – but you know that because you’re looking at it! It means that I can now update it myself and I will be doing so much more often so come back and have a look regularly. A thousand thanks to Jim Hancock who ran the old one for me for donkey’s years and for Rhys at High Heel Creative for all his work on this one.

So, after that long pause I’ll catch you up on the past few months…

I have been plugging and producing Facts & Fiction which goes from strength to strength. (If you don’t know it have a browse through those pages here.) It was good to have a stall at Festival at the Edge where I could meet current and future subscribers and put a few faces to names.

Two books: in the Shop there is a new book for which I was very pleased to write a chapter: An Introduction to Storytelling (https://petecastle.co.uk/product/introduction-to-storytelling/) It has pieces by many of the top names on the storytelling scene and covers many aspects of the art. If you are at all interested in storytelling then you should have it!

There is also Katherine Soutar’s book of cover illustrations – Painting the Tales. She has done the cover designs for the whole of The History Press’ Folk Tales series (well over 100 books!) and in this book she has chosen a selection of them to show and write about – how she chose and made the images, the difficulties and pleasures involved etc. Amongst them is my Where Dragons Soar with it’s picture of Reynardine outside Whitby Abbey – a really powerful image which she says she had to keep covered up because it made her uncomfortable! I haven’t a stock of these so get it direct from THP.

Living Tradition magazine published a piece by me about the history of the Derby Ram which I suggested could be related to similar rituals involving men dressing up as large animals found all over Europe. Perhaps it is a relic of pre-historic religion… I half expected for mumming experts to ridicule the idea but I’ve had a lot of responses and all very positive.

On the ‘live’ front I have also been quite busy. The highlight was a two-handed performance at Number 28 in Belper with friend and fellow storyteller Nicky Rafferty. There are two videos from the show on my You Tube channel. https://petecastle.co.uk/pete-castle/pete-castle-on-youtube/

Over the next few months I have some interesting performances scheduled including Tenterden Folk Festival and a couple of events for Discovery Days. I will write separate posts about those nearer the time.